Over the past few months I’ve been feeling a bit overwhelmed by twitter. It seemed my timeline was a never-ending stream of things I felt compelled to read.

Some of it truly was important (Well as important as a tweet can be). Much of it though was just chatter. Blocking me from reading more important things and honestly just plain demoralizing to read constantly.

So I decided to act. To take back my personal twitter steam.

I was following 299 accounts and my goal was to bring it down between 50–75. It ended up being easier than I thought to be honest, with minimal bloodshed. In the end I got it down to 90, a reduction of 67%.

The results were immediate and amazing. After being offline for hours I’m able to go into Tweetbot and have a handful of posts to read rather than hundreds. I can spend more time on replies and less feeling overwhelmed by the sheer volume.

The only tool I used is called SocialBro. It’s free for up to 2 accounts. Really any of these social management tools will probably work. What won’t work very well is your normal twitter client or the website.

You’ll need access to some more data than they provide. In addition, you need a tool that makes it easy to quickly delete a lot of your following. SocialBro has both, though they’re a little wonky to get at. Here’s a few screenshots to show you where the important stuff is and how to set it up. 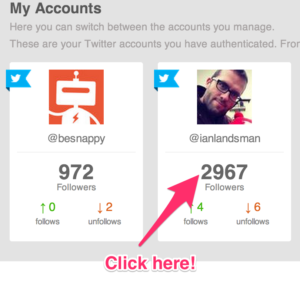 The criteria drop down also has several other important options such as the ability to show you who you are following who’s not following you (dead meat!) 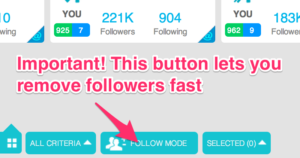 Getting in the right mindset

Now, you’re going to feel oddly sad about starting this process. You know these people, they’re your virtual friends.

Well, some of them are going to have to go :(

The good news though is that those who remain will get your complete focus. Also, you’ll be surprised how many accounts you follow aren’t people at all or are people that you have no idea who they are.

I literally thought it would be impossible to cut my following count anywhere near 100. Setting a goal beyond what you think is possible will help you click that unfollow button on those accounts that are borderline.

Now, just start working your list. Here’s a few things you’ll want to sort by, look at and consider.

Pretty much all famous people and most internet famous people can go. You can catch up with them on TMZ or Hacker News (you don’t read that right? right?).

Top code tricks, inspiring advertisments, historical pictures, etc etc. All of these have to go. Replace them with RSS feeds if you can. Go read the actual sites if you have time.

These are some of the best ones to remove. They tweet often (always via automation) and usually contain links or other distracting things. Remove the accounts, remove the distractions, gain back 30 minutes a day.

Companies who added you on their own

If you use Twitter to authenticate with other systems or for those systems to tweet on your behalf they’ll often just add themselves to your following. Obviously those go.

We’re shooting for a goal here. There’s no point in following people who don’t tweet. They’re just clogging up your list.

Remove anything you can replace with RSS

A lot of companies and systems are just tweeting what they’re posting to a blog somewhere. Remove them from twitter and add them to your feed reader (I like Feedbin.me) and read it as you have time.

People you haven’t interacted with in forever

You know, the person you met at that conference 4 years ago. Those old coworkers you never talk to, etc. They have to go.

There’s some companies I need to follow. Perhaps they provide a critical system for one of our products for example. I want to stay up to date on what’s going on, but I don’t need it realtime in my timeline. For them, unfollow and add them to a Twitter list.

A lot of people recommend using lists to organize your twitter reading in general. To me, turning twitter into a 20 list Hydra sounds even worse than a single busy timeline. So 1 list for companies/services, that’s it.

People you kinda know, you sometimes interact with. Perhaps they’re part of a community you’re a member of. These are close, but most of them have to go.

Remember, they can still read you, they can still @ you, if you leave enough people from the community in your feed you’ll likely still catch important things they say/do via RT’s etc. You’re trying to up the value of your twitter world by subtracting noise.

Some of the noise is from nice people who you like and don’t want to offend. That’s why it’s better to rip the bandaid off! Get everyone removed all at once. Hey, you can always add them back if you need to.

Ok. You’ve worked through it all. Now let it rest for 20 minutes. Then go back in for another pass. You’ll see accounts you missed the first time. It also gives you time to think through any borderline ones you left in.

Step 3: Bask in the glory

Twitter is the fun useful tool you remember it being before you were following 800 accounts. You’ll be shocked at how much more time you have as well as the amount of focus you’re able to give what remains.